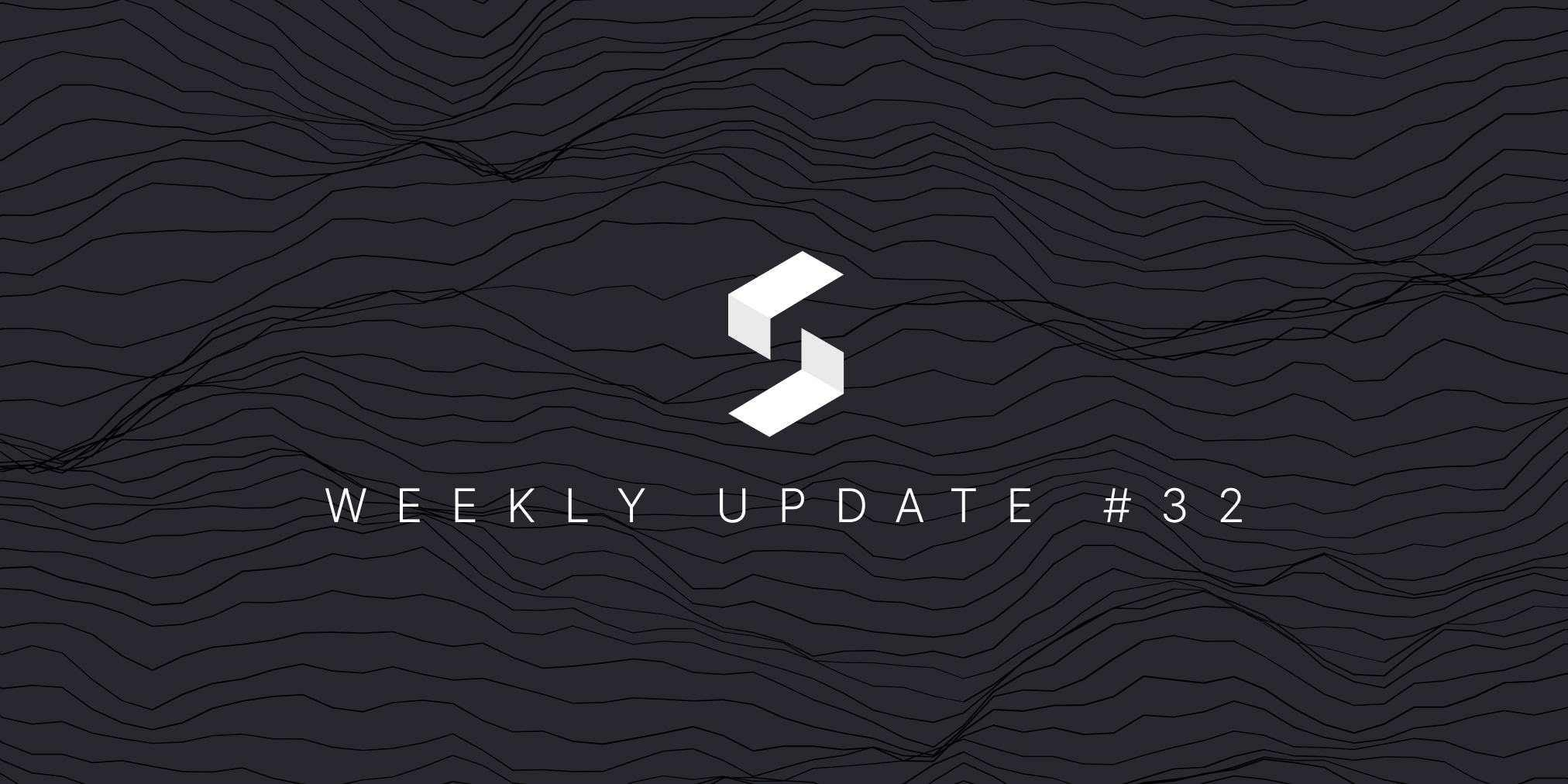 - Preparation for Rewards V3 migration this coming week after a few needed tweaks to the migration scripts and development infrastructure.

This week marked the third week of our semi-weekly AMAs. Join us in the Sienna Network Telegram channel every Tuesday and Thursday for educational AMAs with individuals and teams developing exciting new projects on Secret Network.

Button Group is a dApp protocol that develops utility applications for Secret Network and NEAR Protocol.

The AMA with Steven from the Button Group team happened this Tuesday (February 8). Here is the recap: 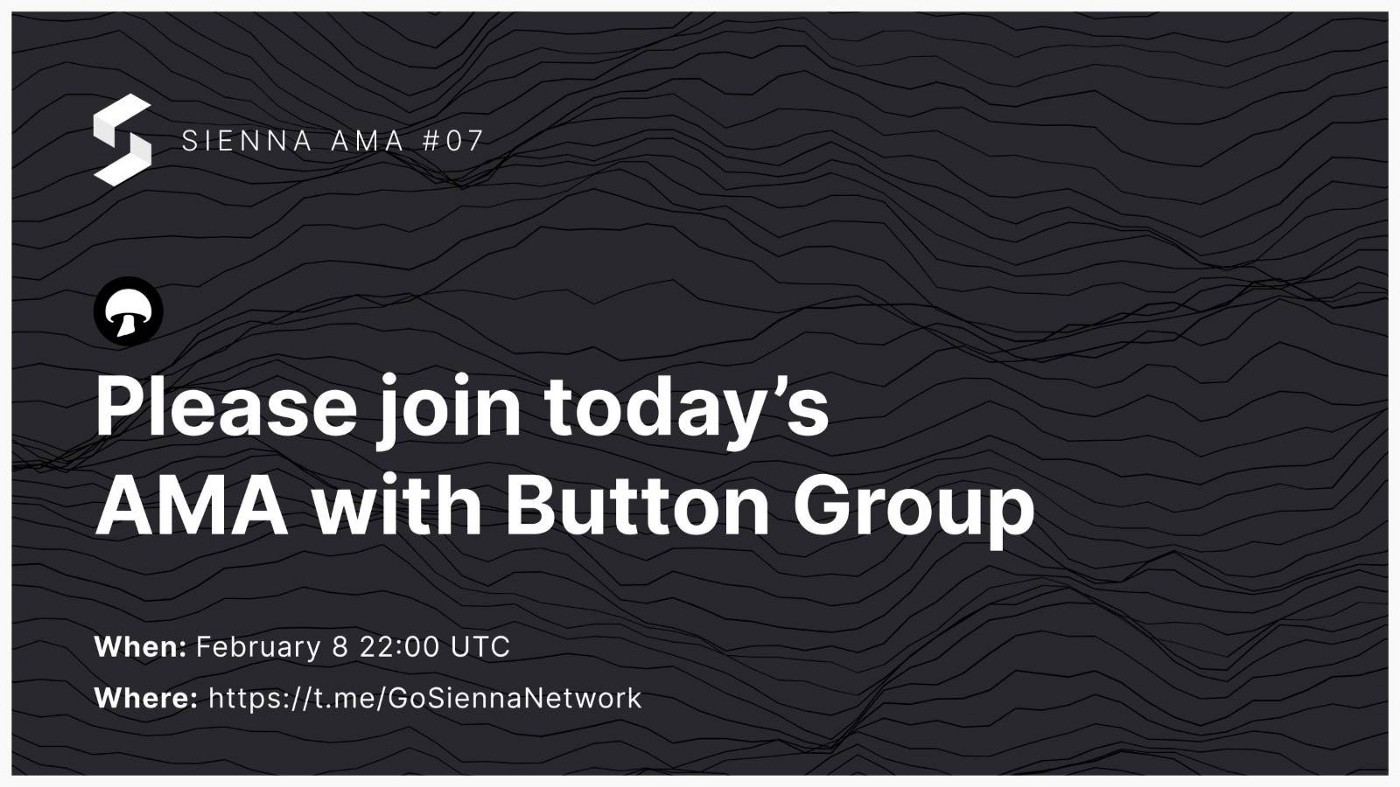 Steven: I’ve known about and used crypto sporadically since the bull run of 2017. But wasn’t big about it then. Just used as a utility. Since all the covid stuff happened, I started getting really into it. Then watching Ivan on Tech, he just pumped me up to go full time crypto early last year.

Host: What is Button Group?

Steven: Generally speaking it’s a protocol that is developing a variety of apps and dApps on the Secret Network. So far we’ve built a web smart contract interface, a transactions viewer for Secret Network’s privacy tokens, Address Alias: a naming service for wallet addresses, Block Locker: a blockchain decentralized solution for storing your wallet keys, a decentralized password manager, a variety of pools for farming and yield optimization and finally Button Swap, a DEX aggregator for the Secret Network that gets you the best swap rates. Oh and I forgot, home of the $BUTT.

Host: What is BUTT?

Steven: Our native token. So far it’s used for profit distribution from our yield optimizers, payment for some of our dApps and to figure out VIP levels to calculate fees for Button Swap.

Host: What was the inspiration behind the Button/BUTT branding?

Steven: I was talking to Chris, he does a lot of our designs, and I told him I wanted something that was a bit mysterious, grows fast and is fun, to fit in with Secret Network’s theme. We decided we both love mushrooms and button mushrooms is the unsung hero of them.

Host: Can you please briefly outline the tokenomics of BUTT?

Steven: Yeah initially there was 100,000,000. But when the lockdowns started getting extreme in Oz, we stopped work for a while to try to figure out what was going on and what to do. The BUTT holders got a bit anxious after a while and asked us to get back to work, understandably. So we decided to burn ~72M tokens, including the team allocation. Now there’s a max supply of ~28M, with ~9.5M in circulation and the rest to be distributed to BUTT-SWBTC LP farmers at a rate of 1.4 BUTT per block.

Host: In your opinion, what impact will the Button Group ecosystem have on Secret Network DeFi?

Steven: We’re hoping we’ve helped the ecosystem so far with some of our tools. Button Swap I think will help a lot of people stay within the ecosystem for swaps as it reduces the frustration many members have vented regarding slippage etc.

Host: How can Sienna utilize the Button Group ecosystem, and vice versa?

Steven: Even though there’s no official partnership, we are technically both utilizing each other already via Button Swap. Their liquidity pools, alongside Secret Swap’s pools, are used by Button Swap to get the end user the best rates. This means that Sienna pools will still get the trading fees and if the user has a good experience and stays on secret network, they will trade more which is a win for every protocol involved.

Host: What are your long-term goals and ambitions for Button Group?

Steven: Everything changes so quick with blockchain, so it’s hard to give you specifics. However, we entered blockchain because we’re not happy with the centralization of the current financial system and most other aspects of society. We think Blockchain can solve a lot of these issues. We want to contribute and be part of the excitement and really stick to the fundamentals of blockchain (transparency, immutability, decentralization) with everything we build. As blockchain is permanent, hopefully we can write a contract that lasts a long time and future developers will look at.

The AMA with M.B.T from the Sienna Knights NFT team happened this Thursday (February 10). Here is the recap: 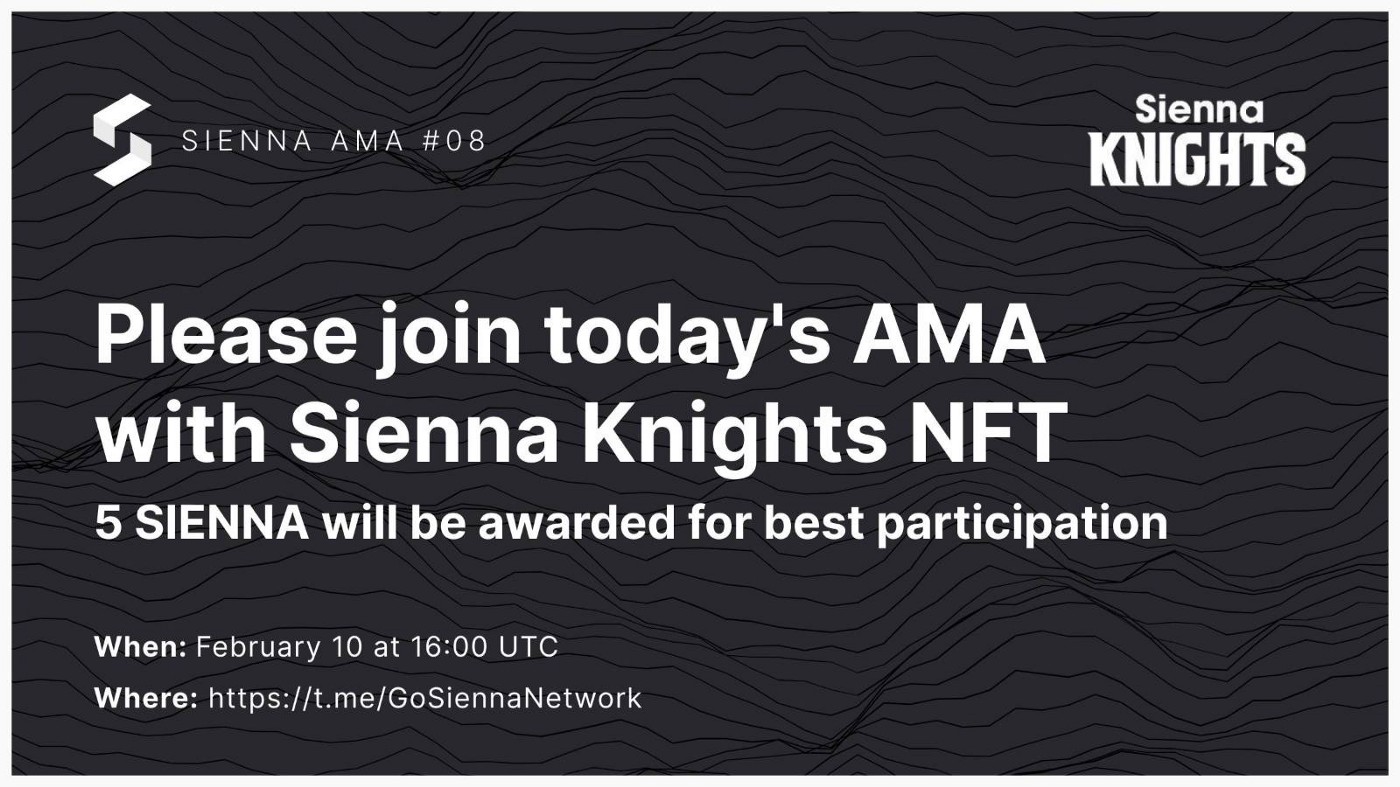 M.B.T: Due to the nature of my work and friend environment in the 2010s, I have gotten accustomed to crypto and bitcoin. Well, let's say I was at least used to the talks of it, which I usually pushed away as a dumb and lazy way of avoiding actual work, probably like most people. Then I bought in during the previous bull run around 2017 because throwing away some money wouldn't hurt. I made money, then kept doing so. Back then the announcement of a new website would pump a coin haha. Everything was dandy up until January 2018 as we all know. Around this time is also when I was invested in $ENG.

Host: When did you first begin creating NFTs?

M.B.T: Well NFTs are more or less the same story. I pushed the talks away until I couldn’t any more, but this time I became obsessed with them. In a very confused yet analytical way. Trying to make sense of NFTs took me some time. Not the technical aspect, but the “People are actually buying this’’ part. Creating them was a different question. See, I can not work on something I do not deem meaningful. In the last couple of years, we’ve been reached out by certain NFT projects for promotional and video-graphic work. At that time we were solely doing Web 2.0 products and services as an agency. This small but fulfilling flow of work relationships with NFT projects got me to actually care and build FOR the greater good of NFTs and seeing the crazy, particularly amazing communities that build around them is what has gotten me the meaning I desired. Although I’ve had many chances to create my own collection before, being involved as a Co-Founder or a direct Creator has first been with Secret Dogs. Secret Network feels like home to me, I value it greatly and couldn’t pass on the opportunity of doing more significant work rather than just my natural trolly attitude in Telegram chats.

Host: What are the Sienna Knights NFTs?

Host: What was the inspiration behind the Sienna Knights branding?

M.B.T: Sienna Network's branding and the historical storification of it. It has a mythical yet grounded essence to it that just captures you and takes you in. I'm referring to the Knights Templar, the city of Sienna and the encryption methods they've used. Our launch point was; “What if this story was modernized and brought to today's day and age? How would the Knights of today be inspired of their ancestors and what would they look/act/talk like?” It was a very rewarding and exhilarating creative process in which the Sienna team and the Sienna Knights team were glad to be a part of. It is a lore build up with endless possibilities and is highly subjective. Which definitely was one of our goals. Sienna Knights are protectors, and their goal is bringing privacy to decentralized finance. Privacy is sacred and has to be protected unconditionally. Sienna Knights are the protection we need because they are us and we are them.

Host: What is the total supply of the Sienna Knights NFTs?

M.B.T: For total supply, we have settled on the number of 222. We wanted scarcity and to keep the elegancy theme that runs throughout Sienna Knights. You have to admit, 222 is a very cool and elegant number.

Host: Can you provide a brief breakdown of the different rarities?

M.B.T: The collection consists of 180 Commoners, 30 Nobles and 12 Commanders. There are over 30 different Knight designs, all elegantly designed. Other differentiations include Gadget allocations such as Environment Conditioner, Night Vision, One-Eye Visors that each help build the Sienna Knights story and give every Knight a character. Other traits include Background variations, Badge Colors and Coverage type.

What I mean by coverage is an easter egg. Oh, and the easter eggs do not end there. We have awesome surprises within the collection, one I can think of is SIENNA rewards hidden within metadata.

Host: In your opinion, what impact will the Sienna Knights NFTs have on the Sienna Network ecosystem?

M.B.T: Sienna, since the private sale and the launch of SecretSwap, Sienna has proven to be a team that builds awesome products. With Lend and Launchpad on the way, we feel the community of Sienna will grow stronger moving forward and Sienna Knights at core are a community growth boost.

Host: How can Sienna utilize the Sienna Knights community, and vice versa?

M.B.T: NFTs are very hype, as we all know and can do wonders for awareness if done right. If we take Sienna Knights as Brand Ambassadors of Sienna, a loyal and trusted group which the community and the Sienna team holds close and dear, the growth of Sienna and the building of its products draws the community to an official collection by the team that built these amazing products,Sienna Knights. And Sienna Knight being built this beautifully and looking this cool, catches your eye and draws you in. The story captivates you and draws you in further, at that point you have heard of Sienna, you learn about their products, Swap, Lend, Launchpad, the value of privacy, the fact that you can avoid front-running and are now part of Sienna, part of Secret and an advocate of privacy.

Host: Can you share any alpha about the collection with us today?

And the Knights program: Sienna Knights is a program that aims to grow and empower the Sienna Network community. By joining the Sienna Knights, you will gain access to an inclusive community of like-minded privacy advocates, a wide array of contests and initiatives, as well as the opportunity to climb the ranks of the program and unlock various perks available to top-ranking Knights. Join us on our mission to advance the privacy revolution in DeFi, and help shape the future of the Sienna Knights program.

These two I believe are things we haven’t mentioned earlier and are great excitement for all of us :)