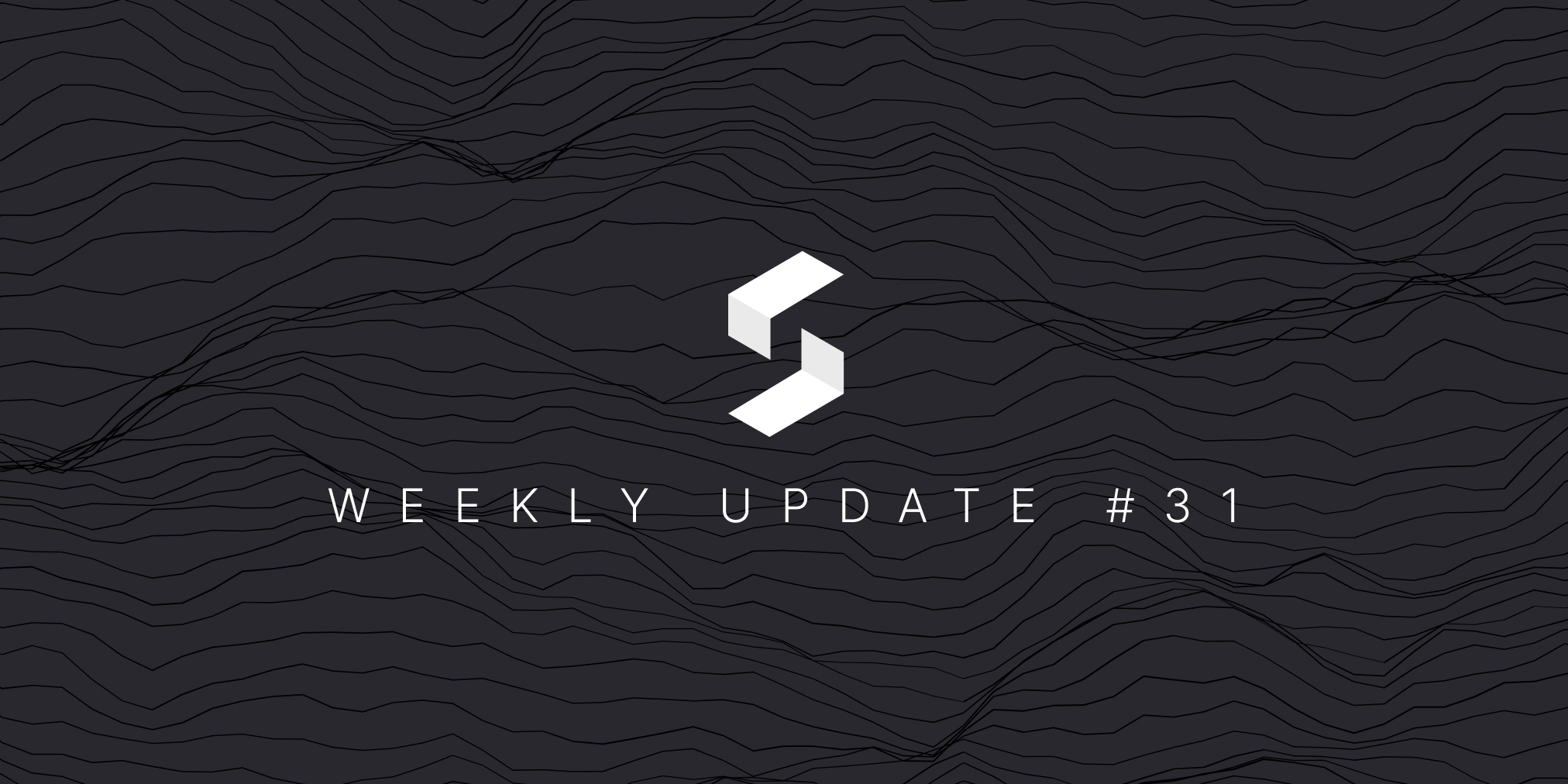 This week marked the second week of our semi-weekly AMAs. Join us in the Sienna Network Telegram channel every Tuesday and Thursday for educational AMAs with individuals and teams developing exciting new projects on Secret Network.

The AMA with Dalton from the Shade Protocol team happened this Tuesday (February 1). Here is the recap: 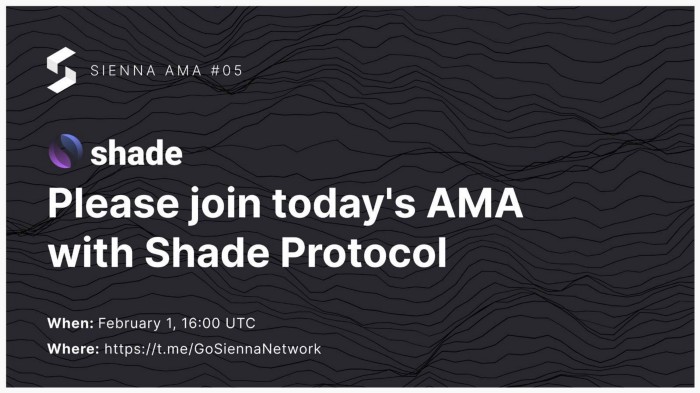 Dalton: Hello everyone! I am the Brand/Community Manager for Shade Protocol! I train jiu jitsu 5 times a week and I played football (soccer for anybody from the US) all the way through University!

Dalton: Before this, I was a Marketing Recruitment Manager at a Fortune 500 in the US! I have been involved in the Secret Network exclusively for the last 1.5 years or so!

Host: How did you get involved with Shade Protocol?

Dalton: Carter met with me over Thai food and basically walked me down the rabbit hole of Defi, and the rest is history!

Host: What is Shade?

Dalton: Shade Protocol is an array of connected privacy-preserving Defi Applications built on the Secret Network. You can find out more at our website: shadeprotocol.io

Host: What is Silk?

Dalton: Silk will be the first native stable coin on the Secret Network. Silk is an algorithmic stable coin tied to a globally indexed basket of currencies and commodities! See Silk Whitepaper: Section “Silk Currency Basket”.

Host: What was the inspiration behind the Silk branding?

Dalton: For Silk, one of the most valuable commodities that was traded in ancient times was Silk. We believe that Silk will represent the same “store of value” for its users 😊

Host: Can you please briefly outline the tokenomics of Shade and Silk?

Dalton: So, we have said before that to keep the airdrop process & claim as fair as possible, we won’t release any specific tokenomics until after all of it is said and done. The community airdrop amount was in all in all about 14.5% of total supply of Shade. It will be interesting to see how price discovery plays out :) We don’t expect everyone to claim their airdrop either, so we have implemented the Osmosis release model ⅓ model for decay. The way the airdrop is structured, users will receive 25% of their airdrop on February 21st and the other 75% when SILK launches!

Host: How does the Shade Protocol compare to Terra? What are the key distinctions between UST & Silk?

Dalton: UST is directly pegged to the US dollar, Silk is not. Silk is pegged to a “basket” that is made up of many global currencies and commodities like bitcoin or gold.

Silk can represent the value of $1.00 but it does not derive its collective value solely from the US dollar, like UST does. See Silk Whitepaper: Section “Silk Currency Basket”.

Host: In your opinion, what impact will the Shade Protocol ecosystem have on DeFi?

Dalton: I think the biggest impact that Shade will have on the Defi ecosystem is how we capture value for the Shade DAO through primitives. Shade is THE governance token for every application that is built on Shade Protocol. This means that once you are in the ecosystem and own Shade, you will be able to use countless primitives with 1 token AND all of those primitives directly capture value for the Shade DAO. Plus Shade is built on Secret Network, so we already have privacy baked in :)

We are the first project to successfully launch a multi-chain airdrop, regardless of ledger use and validation is all permit-based! See our Roundtable discussion for more details:

Host: How can Sienna utilize the Shade Protocol ecosystem, and vice versa?

Dalton: Shade will immediately be listed on SiennaSwap post airdrop for easy access to all Sienna users. There will also be a very exciting product announcement soon that will be exclusively available on SiennaSwap!

Dalton: In 5 years’ time, we would love to see Shade Protocol in a state of self-sustainment. The core team wants to be able to help build and grow the protocol and one day, the protocol is so decentralized that it is purely self-sustaining. Overall, Shade Protocol is here to push the narrative of privacy and fight for the right of the individual’s control over their personal finances. Trying to change Defi/PriFi without these something like Shade Protocol would be pointless in our minds. One of the core beliefs for Shade Protocol is that “Privacy Is A Human Right.” This will done by iterating upon and growing various dApps/Primitives on top of Shade that provide an entire DeFi ecosystem for its users, securely, and fairly.

Griptape is the web framework for developing dApps on Secret Network.

The AMA with Sandy, Victor, and Luis from the Griptape team happened this Thursday (February 3). Here is the recap: 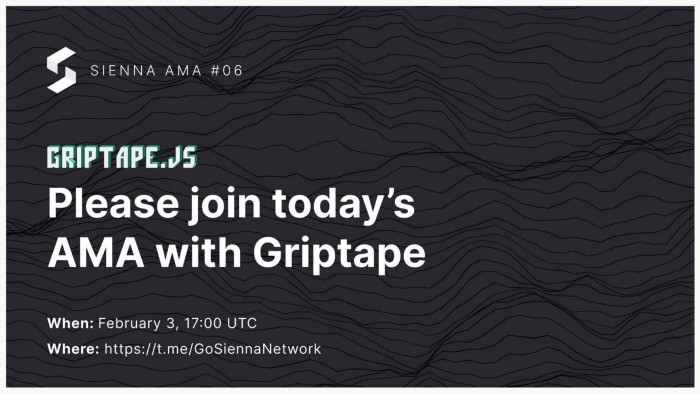 Sandy: Sure, Thanks again for having me. I’ve been on the periphery of crypto since very early bitcoin days. I have a lot of great, “Why didn’t I invest when everyone I knew was getting rich” stories. But I really got invested in 2017 and the project I got most excited about was Enigma. I invested a small amount, sat on it, and then in late 2019, for whatever reason, I dove back in hard. I setup a validator and started participating in discussions and when a request went out for proposals to build the network website I raised my hand. That is my crypto journey in a nutshell. To get that site built I reached out to a friend a colleague, Victor who owns a dev shop in Ensenda Mexico.

Host: What is Griptape?

Sandy: After the initial website build we worked with the [Secret] foundation to build a frontend for a contract that Baedrik was writing called the Sealed Bid Auctions contract. Victor and I thought it would take 2 weeks and it ended up taking 2 months to build. This gave us a pretty brutal education in the challenges of building UIs for dApps. But over those 2 months we built some APIs and simple processes that we thought were good solutions to the issue we had. With that work we started to talk about the idea of web development framework that would make building on Secret Network much easier. It was at this point that we brought on our third partner Luis. Luis is smarter than Victor or me, so we brought him what we had and asked him to take it from there.

While he toiled away on it, we gave it a name, Griptape.js, to fit with the skateboard theme I had started when I named our validator Stake or Die, an homage to skateboarding video games from my youth. So yeah, over the next few months Luis and I built and rebuilt Griptape a few times, learning as we went. And then finally, with a working beta, we went to the ecosystem fund and asked for a Grant. Once that was accepted we were off to the races.

Host: Can you please briefly outline how Griptape works?

Luis: Griptape is a web development framework for building dApps on Secret. The main focus of Griptape is to give developers the ability to easily bootstrap and set up an app that can interact with Secret Contracts. Therefore, users have at their hands a set of APIs that help them rapidly scaffold an application, connect it to Keplr, and define the contracts they want to interact with. And the rest is history.

Host: What are some of the benefits of using Griptape as opposed to secretjs, and where do web frameworks like React and Vue fit in?

Sandy: So it is important to note that Griptape doesn’t replace anything really. It adds onto those tools, or better said, fits between them. If the blockchain, smart contracts and secretjs are the skateboard, and react Vue and the users are the skater, Griptape is the, well the griptape, that helps the skater do his/her thing. So we built it in pure typescript and in a way that works seamlessly with React, Vue, or any other UI framework. We have been trying it out over the last 2 days with Svelte and it worked amazingly well. A user is trying to get it working with Phoenix LiveView, which is crazy, but will be insane if he can get it working.

Long story short, it’s just a layer that makes gives web developers tools and shows them a path of how to make what they are already doing work with Web3 and Secret Network specifically.

Host: What is the Griptape Hackathon? How can people participate and what can they win?

Sandy: Part or our Grant proposal was a Hackathon. The reason we put it in there was that we recognized that it is not enough to build a tools no matter how useful, you need adoption, people to use it. The idea is that we built it in line with our proposal and now it is time to release it into the wild and get people using it. This will both help drive developer engagement in Secret Network, and help us test out what we’ve built with the people we built it for, people new to Secret Network and/or Blockchain developers in general. So the setup is that everyone is trying to build the same app with the same smart contract(s). That way we can all focus on the front-end and how Griptape helps with that.

It was a happy coincidence that the application that inspired this to begin with is in need of some serious TLC. The sealed bid auction contract also requires a UI that utilizes pretty much every feature of Gripape.js. So that is what we decided to make the shared contract.

We are giving out three prizes:

Host: What are your long-term goals and ambitions for Griptape?

Sandy: Well, first and foremost we want to make it the default way people build UIs on Secret Network. It is our opinion that it is by far the best way to build a UI. Basically it does a number of things that you will have to do no matter what. So why bother doing them yourself. Beyond that we are seeing ways in which other networks could benefit from Griptape. Developers in the Cosmos ecosystem shouldn’t be stuck to one chain, and we should need to convince Terra or Juno developers to learn anything new to build on SCRT. Anyway that’s the theory, we are looking into it. But for now make Secret Network as easy to build on as possible.